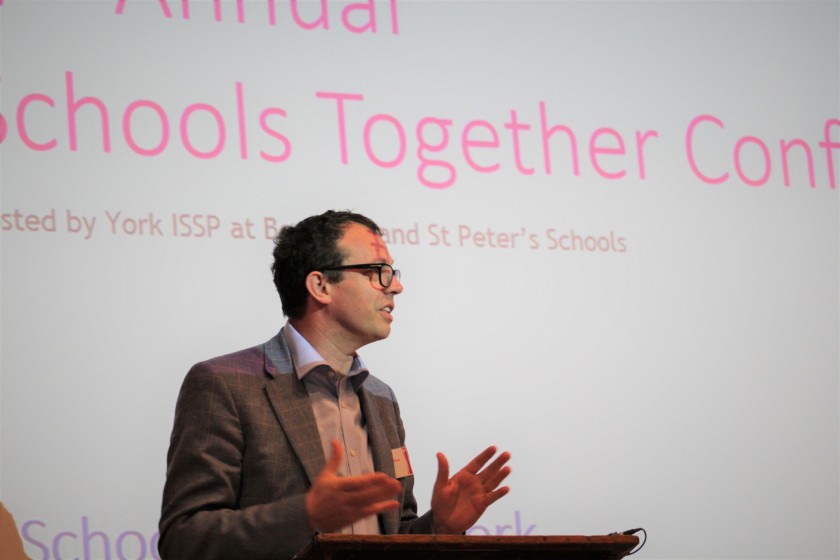 More than 130 delegates have gathered in York for a major conference designed to promote partnership working between state and independent schools.

The Schools Together conference attracted representatives from across the country, including staff from both primary and senior state and independent schools, the Department for Education, universities, multi-academy trusts, the New Schools Network and charities including Springboard and the Ogden Trust which work to improve access to quality education. Representatives from school umbrella bodies, including the Independent Schools Council and the Girls’ Schools Association, were also in attendance.

Tom Arbuthnott, Chair of the Schools Together Group and Director of Outreach and Partnership at Eton College (Photo above), said: “There is a vast amount of partnership work taking place between state and independent schools, benefiting thousands of pupils every year – but much of this work is going unreported and unremarked. The Schools Together conference is an outstanding opportunity to share ideas and best practice, and provide advice to schools on how to extend their activities.

“Working together, and learning from and inspiring each other, is the only successful route to successful partnership. I am delighted to have the support of the Department for Education and the Independent Schools Council in bringing so many schools together.”

The event was hosted by the York Independent State School Partnership, which is an equal partnership of nine state and three independent schools, and has been hailed nationally as an example of best practice in school partnership work.

Leo Winkley, Head Master of St Peter’s School and Chair of the York ISSP steering committee, said: “We have witnessed at first hand in York the difference that real, sustained collaboration can make to young people. Our partnership work here is not only inspiring pupils and staff by providing them with many more opportunities than we can ever offer individually, but there are also early signs that participation in partnership activities can in itself help to increase academic attainment for some pupils. Successful partnerships require wholehearted commitment and a genuine sense of mutual benefit, but where they are working well, they add value for everyone involved.”